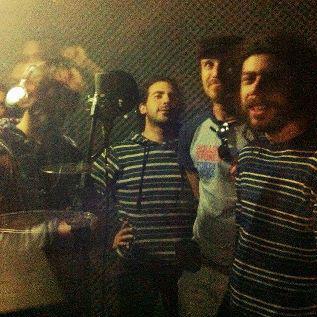 The Barbacans started out in 2006 playin in a very little room. They were five. Then they became four.They are playin in a very large room.
2008 marks the debut for The Barbacans, garage band from central Italy, characterized by powerful Garage Revival sounds, 60s riffs, Fuzz and Farfisa. The Barbacans are: Pyramid Carnarelli – Voice and Farfisa, Il Sindaco – drums and screams, Walker – guitar, and Psych Guescio – bass. Since September 2007, The Barbacans participate in several music festivals and perform in some of the biggest European clubs, sharing the stage with legendary bands such as The Morlocks, A-Bones,Trashmen, The Seeds… Produced by Boss Hoss Records Italy, The Barbacans then recorded their first single on 7″ vinyl, distributed internationally by Godown Records, and featuring two songs clearly stating their intentions. In December 2008 their first video “Phantom Opera” is released, produced by Pamela Bursi and directed by Andrea Giomaro, and available online. In January 2009 The Barbacans record their first LP “God save the Fuzz” at the famous Circo Perrotti Studio in Gijon, Spain. The album has been released in April 2009 in Italy, Europe, Usa and Canada, produced by Boss Hoss Records Italy and distributed internationally by Godown Records.
Then they toured Europe, Mexico and China between 2009 and 2012.
Walker left the band in 2012 playing his last concert with the band in Shangai.
Now the band is preparing his second LP that will be ready for the Autumn of 2012, produced by Boss hoss Records Italy and other featuring.
Other release : a fantastic Split with Los Infierno (Mexico) with two covers from the Kinks and the Brogues recorded in Jan 2012 in Primitiv Studios and always produced by BossHoss Records Italy